Posted on September 13, 2015 by canadawaterwest 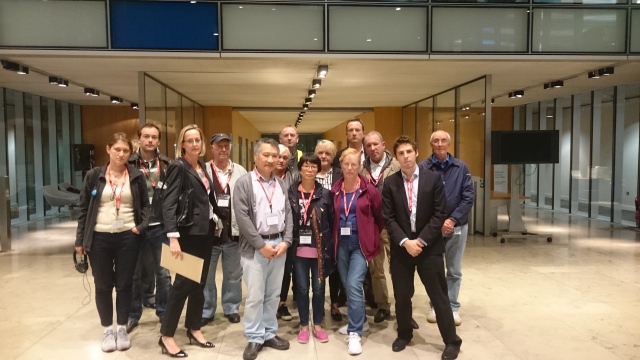 Rotherhithe residents at the committee meeting

Last Monday’s meeting of the Southwark Council overview and scrutiny meeting gave us the chance to put the residents’ view to the council and listen to Councillor Mark Williams defend his decision to push for a resiting of the Seven Islands leisure centre to the Surrey Quays wildlife area without real consultation.

The result is that although consultation is going ahead concerning the preferred controversial new site, the committee made various recommendations including giving residents a chance to suggest alternatives. They have also asked Councillor Williams to publicly state that he will reconsider if opposition is “overwhelming”  – as we know that it is!

We are still waiting to see the final wording of the resolution passed by the committee but it appears to be a small concession. The meeting was also a great chance for us to show some of the wider council how united and fierce our opposition is.

“Local people are willing to take up the council’s challenge to prove that there is overwhelming opposition to the plan to tear down Seven Islands and relocate it on a wildlife area, destroying dozens of trees in the process. No-one we have canvassed locally supports the plan.”

“The scrutiny committee meeting revealed how cavalier the council has been in pushing for a preferred site without consulting the community first.”

“Mark Williams claimed at the meeting that it would have been ‘disingenuous’ to take soundings on other possible approaches because it had such a strong preference for the wildlife area site. Such an assertion makes a mockery of the consultation process. It is the same as saying: we can bypass the community because we know what we want already.”

“Southwark Council will be both developer and planning authority in this matter, giving it unusual power to do whatever it wants – this makes it even more important that it does not skip stages before it considers its own planning application.”

“The council claimed at the meeting that Seven Islands is too small for a modern leisure centre, even though there is lots of unused land within the site. It failed to put forward any evidence for this bizarre assertion. The wildlife area it wants to build on, however, is in a cramped and out-of-the-way position.”

“It also became clear at the meeting that there has been no substantive dialogue with Transport for London over the need to get clearance from TfL if it does build on the wildlife area. There is a strong chance it would need special dispensation to dig so close to an Overground tunnel, for a start. This could take years, or the permission might never be given.”

“So even if Southwark Council ignored overwhelming local opposition and continued with its deeply-flawed plan, it might still be forced back to the drawing board by TfL. This would be a waste of taxpayers’ money and delay the much-needed regeneration of Canada Water.”

We will also post video from the meeting and evidence put forward by speakers in separate posts.

Finally THANK YOU to everyone who came along. We had people from all the affected streets and a good crowd as the photo shows.

We’ll update you with the campaign next steps very soon – it’s going to be up to us to prove the community is against the council’s plans.